So this is the very last time I will be playing this game. Seriously. The last time. I have to admit though I really didn’t want to play this game again. I had a horrible time with the Vita version, you can see my review here, and I was just dreading playing it again. I was going to put it in the back of the pile and look at it when I was ready to, but decided that it was probably best to just get it over with. Here’s what I thought about the PS4 version.

For this season you’ll of course play as Clementine. On her own basically since Lee’s departure in the first game, you can’t really count on Christa and Omid to look after her at the beginning of the game. I mean, seriously, who lets a little girl go into a bathroom alone in the first place? Even without a zombie apocalypse, it’s just something that you don’t do. Anyway events that take place leave her even more alone and struggling to make it on her own. She’s really only a little girl, but because of this new world she’s not seen like that.

Throughout the course of the game you’ll be reunited with an old friend, make some new ones, and you’ll sure as hell make some enemies this time around. The characters are the shining stars of this season as each of them will have their own opinion about Clem depending on what she does or doesn’t do. Some will of course hate you at first and then change their minds while others will maybe hate you throughout the whole game. You’ll make some pretty hard choices and then make a few heart breaking choices in the end. How you finish Clementine’s story is completely up to you.

Even though this is the third time I played this game, a third time that I didn’t’ even want to do, I have to say I was pulled back into this Walking Dead universe that Telltale has created. I was bitter at first since I had such a bad experience with the Vita, but soon got over it and was hooked in the story once again. Everything from the course of what happens in these five episodes all the way up to the new characters were things that kept me coming back even though I of course knew how it was going to end. If there’s one thing that Telltale does right every time is they know how to keep it interesting. Unlike the first season there was no dragging episode. Each of them were as interesting as the previous one and had me hooked.

What an improvement with the playability. While the PS3 had its normal issues and the PS Vita was the absolute worst, the PS4 just shined. Everything from slow loading and freezing to slow trophy pops and just weird animations were fixed. I seen absolutely none of these in the PS4 version. I was completely and utterly shocked. I thought that if the PS Vita version felt rushed and just used as a money grab that this would be the same, but it was the complete opposite. This game was completely bug and glitch free which was just shocking and a nice little bonus.

The graphics are the same for this version as they were for the PS3 and PS Vita version. Like the PS4 version of Season 1, they seemed to be a little crisper and gone were the weird shadows from the Vita version along with the little pixels of light peaking in from the buildings. Everything about the graphics was just flawless.

After playing through 5 episodes you’ll get 40 new trophies. Don’t worry about how you play the game and just play because no matter what you’ll get these trophies. No platinum this time around, but I could care less. I didn’t play this game on different consoles and multiple times for a platinum, I played it because I genuinely enjoy this game and want to see how each version differs from each other.

No multiplayer to report on, and I seriously never get tired of writing that. Single player games for the win.

Overall I give this game a 5 out of 5

What’s Not So Great:
– I really don’t have any complaints about the PS4 version of this game.

If you haven’t played this game yet, then why the hell not? Seriously, even if you aren’t a Walking Dead fan you should still pick up this game. Not only does it have amazing story telling, but you’ll become immersed in the world that Telltale created for this game. My only recommendation is to play it on the PS4. While the PS3 version was standard, the PS Vita version was awful. If you want the best experience then the PS4 is the place to get it.

SPOILERS! Below are all of the choices that I made throughout the game. I tried to mix things up as much as possible from my previous two playthroughs. 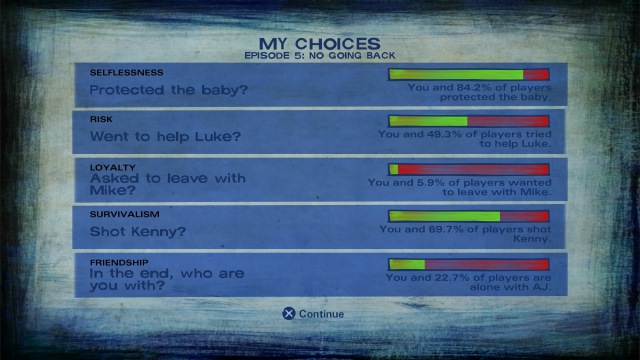