Not a whole lot to brag about this week as I’m currently trying to finish two games while I just started a new one. Luckily the newest episode of Game of Thrones was released this week so it bumped up my lackluster trophies just a bit. Here’s what I got this week.

This isn’t my first time playing Fallout 3, but it is my first time playing with trophies. I remember playing this game when it first came out and then dying just as soon as I left the vault and completely giving up on the game. That was before RPG’s became my very favorite video game genre. I bought the game a few years back and finally decided to give it another go with the upcoming release of Fallout 4. I plan on leisurely playing this game in order to get a better feel for it this time around.

No platinum trophy this week, but I’m almost there. Currently I’m grinding out the Stocked trophy. I’m really close to having all the collectibles and once I do that should unlock the Battle-Car Collector trophy since I’m just missing Sweet Tooth. After that I just need to play with a friend to get my platinum. 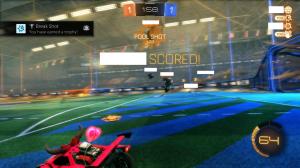 The newest episode was pretty unexpected, but not unwelcome as I’m eager to finish up this game to see how it all ends. I’m thinking that Telltale is going to release the final episode before the holiday season so they can have the full game out on disc just in time for all the major holiday shopping. I’ll have my review up for the latest episode, A Nest of Vipers, by Wednesday.

And that was it for this week. A pretty slow week, but that’s what happens when you’re trying to finish up two games at once and then just to add something new to the mixture you start a new game. So this week I’ll be spending most of my Sunday playing Fallout 3 and then it’s back to work for the rest of the week trying to finish up Rocket League, Borderlands: The Handsome Collection – Borderlands: The Pre-Sequel, and Sparkle 2. I’ll try not to start anything new this week, but you never know especially when boredom kicks in.