The last time we left off, I had just gotten my Athena tattoo completed.  I wasn’t done there though, far from it actually as I continue on with my video game tattoos.  So what was up for this month?  Keep reading to find out.

After a long, long process of decision making, tattoos are permanent people so I don’t make these decisions lightly, I decided to take the advice of my tattoo artist and pick a bunch of different characters and let him creatively intertwine them making one whole sleeve in the process.  So who would be the next character on my left arm?  Why Commander Shepard of course.  But to be exact, it had to be FemShep.

So why FemShep?  Each tattoo holds a story for me and this one does too.  To me FemShep represents an extraordinary human being who is tasked with doing the impossible.  Time after time she overcomes these obstacles and succeeds, never giving up she’s unwavering.  She’s a strong and powerful woman and in many ways I can relate.

Now for the kind of difficult part.  The cover up of my previous paragon tattoo.  It wasn’t something that I wanted to do, but it had to be done.  The tattoo was horrible and for that reason it took away the original meaning it had for me.  Take a look at the tattoo below. It’s kind of embarrassing to think that I actually payed good money for this tattoo just three years ago at MegaCon and then for it to turn out like this. I even blamed myself, thinking that I didn’t take care of it properly when it was healing. It wasn’t until I met my current tattoo artist that I was told that it was just really badly scarred over because the guy who originally did it apparently really didn’t know what he was doing. 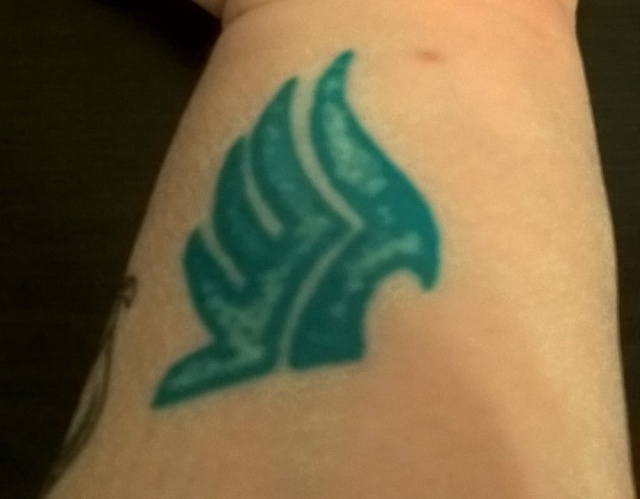 I sent my tattoo artist three different images of what I would want out of a FemShep tattoo and below is what we discussed he would do and how it would look on my arm.

Three hours later and we finished my first session.  Now for the next session, which isn’t until August because I’m totally tapped out from MegaCon and this session, my artist will be working on finishing up FemShep by coloring her in and then creating a scene around her.  There is a bit of a catch though, I’m not telling what we’re going to be doing scene wise, but it’s going to be pretty damn awesome.

Anyway, I’m looking forward to my next session as always and I want to give a big thank you to my tattoo artist who is just amazing.  Without him none of this would be possible and I couldn’t have found anyone better. Stay tuned as I finish up my left arm and then possibly continue to move up or give this arm a rest and move onto my right.