Another interesting week in trophy hunting as I pretty much just stuck to two games. I was tempted to buy a bunch of games and start them thanks to the sale that Playstation was having, but decided that it probably wasn’t best to have a bunch more games on my system when I have a bunch of games piled up on the floor just waiting to be played. I did have a surprise trophy pop up this week when I played a random game from my catalogue because I was absolutely bored to tears. Anyway, here’s how my week went.

I finally got that last trophy that I needed from the Omega DLC. The only reason why I missed it the first time around was because I forgot to hand in one extra mission that comes with this DLC. Playing this DLC for only the second time, I got a little bit more of an understanding about it but I still thought it should have been included in the original game, not an add on DLC, and it’s still one of the worst Mass Effect DLC’s ever. As I also continued playing this game this week, I hit a few milestones in the game that I really wasn’t looking forward to as I continued my journey. For the first time in any playthrough, SPOILER ALERT, I killed Mordin. Shot him right in the back and felt like absolute crap for doing it. Playing a renegade in Mass Effect 3 does not make you feel good. I also got through the battle on the Citadel in which another beloved character bites the dust. My last three trophies for this game are in the Citadel DLC and I look forward to continuing to play and hopefully unlocking them this time around.

I’m so close to getting the final trophies that I need for the platinum, but like the other Saint’s Row’s game before this one, I’m seriously tired of this game. Don’t get me wrong, the Saint’s Row franchise is pretty damn great and I enjoy playing but after a while enough is enough. The game is over and now I’m stuck doing 101 different challenges. Yes most of them are complete, but they’re just annoying as hell. Not to mention that the Fly You Fools trophy totally glitched on me and did not pop even though it was completed as a challenge. Unless it randomly pops as I finish getting the rest of the trophies, I guess I’ll have to start a new game and just fly around. 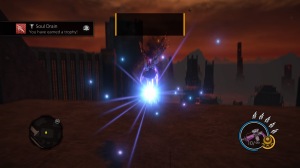 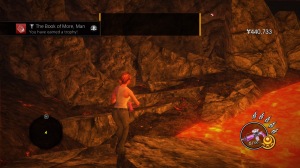 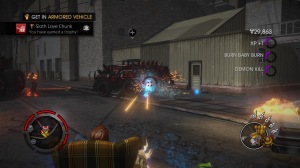 This was the surprise game this week as I was extremely bored and I didn’t wat to get sucked into another 3-4 hour session of Mass Effect 3 multiplayer. I’ve been trying to be good and stick to the main game but it’s really hard especially since this is really the only multiplayer that I’ve ever liked. Anyway, as I scrolled through the games on my PS3, I found this one and figured why the hell not. I played through one whole seasons level, which was a hell of a lot more frustrating than the Mass Effect 3 multiplayer I was avoiding, and was able to get one trophy.

That was it for this week. It’s a decent amount of trophies for the amount of games that I’ve been playing. Lucky me, my schedule is all messed up again this upcoming week and I really have no idea when I’ll be able to game. When I do get a chance though, I plan on continuing through Mass Effect 3, although I’m not sure If I’m actually going to play through the ending or not yet, hopefully finish up Saint’s Row: Gat out of Hell, and maybe play some other random game that’s just sitting around. I’ll let you know how things went next week.