I’m typically not one to complain about things like trophies. Being a trophy hunter, I know that hard to get trophies come with the territory, but sometimes these trophies are just either so stupid, so luck based, or just so UGH, that I needed a place to rant and rave about them so that I don’t lose my mind. While I’m pretty sure this won’t be an every week type of thing, just a I’ve been trying to get this trophy so long and I’m ready to throw my controller out the window type thing, I hope you’ll join me on a new blog and let me know if you feel the same way or maybe it’s just me.

The Game: Goat Simulator
The Trophy: The Flapmaster

Not only am I not a fan of this pointless game, but this damn trophy has been giving me such a hard time that I was just about ready to give up and throw in the towel. This doesn’t happen easily for me as I am one to go for the ultra-rare trophies and at least give them a good try before deciding if it’s worth it or not. There’s just something about this trophy though that doesn’t sit right with me.

Based on face value it seems like an easy trophy. All you have to do is score ten points in the flappy goat mini game that’s within the game. Either a pun off of Flappy Birds or just a rip off of a ripped off game to begin with, scoring 10 points isn’t as easy as it looks. There are things to consider, like you only have to press one button and jump between these objects sticking out of the top and bottom of the screen. You have to have the screen positioned just right so that you can actually see what you’re doing, and the damn game cheats. How does it cheat? Take a look at the pictures below. 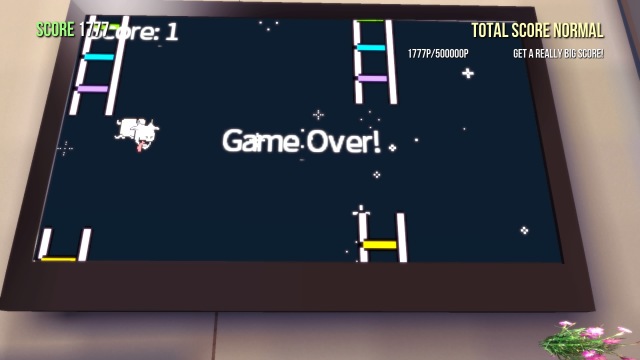 At this point, I’m only 1 point in so it’s ok. I’ve clearly passed the barrier, but the game doesn’t think so.

I’m now 5 points in and the game still cannot see that I have clearly passed the barrier. It’s ok. Deep breath and give it one more try.

SERIOUSLY! Another deep breath. Ok. Close this time, but still. One more try?

WTF! Seriously Goat Simulator! SERIOUSLY! And now starts the raging because I am 9 points in. All I needed was one more damn point. One more barrier to jump through.

This isn’t the only four times this has happened to me, but if I shared every single screen shot of when this happened, this blog would be miles long. You do see what I’m talking about though right? I clearly did not hit the object sticking out of the top of the screen but there seems to be an imaginary box around “flappy goat” that says that I did. To me this is just bad programming which for this game isn’t really a surprise.

So how much time have you spent trying to get this trophy? More time than I’m willing to admit.
Have you gotten the trophy yet? Yes! After spending way too many hours trying I finally was able to get this trophy. This just had to be by good old fashioned dumb luck because I have no idea on how I would have gotten it otherwise. At least the top picture proves that I have gotten the trophy.

Now it’s your turn. Have you played this game and encountered the same exact problem that I did? Maybe you got this trophy and think that it’s just me who had a hard time. Let me know in the comments section and since we’re already on this path, why not go with another controller breaking trophy right off the bat. I’m talking about a trophy that I did finally get after weeks and weeks of trying and way before the patch that made it easier to get, it’s Watch_Dog’s Social Lubricant Trophy.