Here’s the thing, I was never one who was really into RPG’s until I started playing the Dragon Age / Mass Effect series. These games basically taught me how to play RPG’s and made me come to love them. Before my love of these games though I had tried RPG after RPG only to find that although I enjoyed the freedom of the game, I really didn’t understand how to play. There’s nothing wrong with that, but it did make Fallout: New Vegas become added to my I Never Finished list.

Fallout: New Vegas revolves around you playing as “Courier 6”. There’s not much background given to the character but you do know that you were transporting a package through the desert, robbed of the package, and then shot in the head. Left for dead you’ll be cared for until you recover. Once you recover you’ll go on a mission to find the people that robbed you. During this time you’ll explore “New Vegas” which is actually Las Vegas in a huge open world area that has a lot to explore.

I’m not embarrassed to admit that I really didn’t know how to play RPG’s at the time and had no idea what I was doing. Was I supposed to explore and find missions as I go or was I supposed to go forth with the missions that I already had. Everything was kind of up in the air and I had absolutely no idea what the hell I was doing. It was totally a me thing and I was the reason why I never finished this game. Since then though I have come up with my own system for tackling RPG’s and am very satisfied with the results and can easily say that RPG’s are some of my favorite games now.

Another pathetic trophy card as I was only able to get 1 of the 76 total trophies for the game, which includes the DLC. I got the trophy for completing the first mission and then I wandered around until I came across an area where I continued to die over and over again and basically brought this back to Blockbuster. The guy I returned it to, a fellow gamer, was astonished that I had brought it back so quickly and I think it was then that I lost my gaming credit with him. Who knew that I would become the hardcore gamer that I am today, nevertheless I was basically scoffed at until they went out of business every time I rented a new game.

Probability of this game getting played again…4 out of 5.

Here’s the thing with this game, later on, once I understood RPG’s and how fun they were, I went out and bought Fallout 3 and Fallout: New Vegas. The thing is that while I played Fallout 3, I never go the chance to go back and play Fallout: New Vegas. I would very much like to go back and play this game if not to get the platinum trophy, but to just experience this game which I’m guessing that once I really get into it will be really awesome. 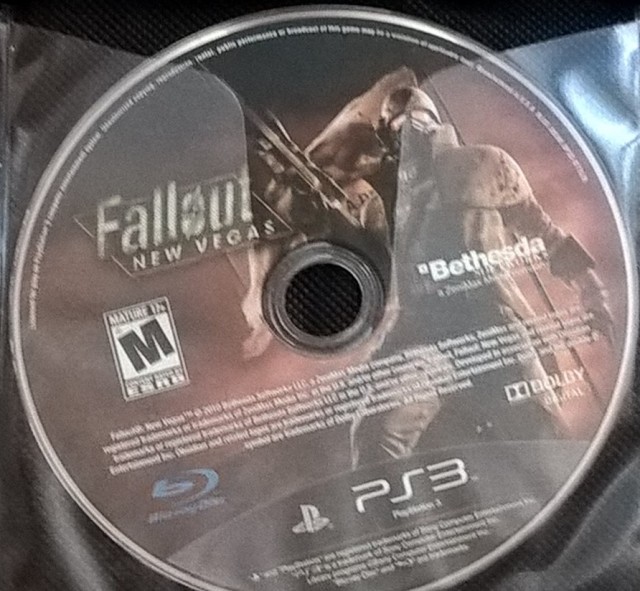 Now it’s your turn. Have you played this game and just absolutely loved it? Maybe it’s not your favorite Fallout game in the franchise. Maybe you even completed the whole game and have the platinum and all of the DLC completed giving you the 100% in this game. Let me know in the comments section below. Now for next week, I was still unwilling to come to the realization that the WWE games were just done for me so, I tried another one. A little more successful than the last WWE games on this list, but I still didn’t finish it. Next week I’ll let you know why I never finished WWE Smackdown Vs. Raw 2011.