Next up on the autograph tour for Thursday at MegaCon was Nell Campbell. Have I mentioned how super awesome my VIP escort was throughout this whole process because right after Barry Bostwick and Patricia Quinn my super awesome crew member, Jay, just moved me right down along the line to Nell Campbell. On that note, and I’m probably going to say this a lot, but sometimes I felt like kind of a jackass for cutting the line but Jay made it like it was super OK. Anyway, onto Nell Campbell. Nell is also in the Rocky Horror Picture Show and she plays Columbia. While Magenta is my favorite character, I would have to say that Columbia is my second favorite and I’ve always loved both characters. Both of them are played to perfection and here’s a little embarrassing fact for you, I watched this movie when I was really young, like younger then you should be to watch the Rocky Horror Picture Show, and each time I would always rewind my dad’s VHS tape to the Time Warp scene because I loved the tap dancing scene with Columbia. I did this so much that my mom bought me a pair of tap dancing shoes so that when the tap dancing scene with Columbia would come on, I could tap dance along with the movie. How geeky is that?

Moving onto the actual autograph though, Like Patricia, Nell was super nice and she also remembered who I was since I just had the photo-op with her. These people see thousands of people a day so when you’re remembered by a celebrity for whatever reason it’s always super amazing and for that moment it makes you feel extremely special because wow Nell Campbell remembered who I was. Nell also personalize my Rocky Horror Picture Show poster making my collection of signatures for the poster complete and just making the overall poster look awesome. After this the poster went away since all of the cast members who were able to sign did, unfortunately Tim Curry wasn’t able to sign and I didn’t like the idea of sending my poster away to have him sign it at a later time just in case something happened to it. Like the rest of the cast, meeting her was amazing and I’m really grateful that she was even there this year, signed autographs, took pictures, and that she was super cool about everything. 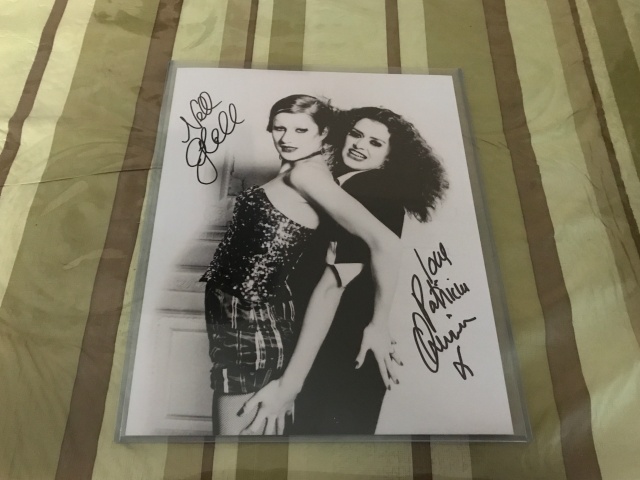