If you’ve been keeping up with my MegaCon blogs, then you know I talked about Elyes Gabel being at MegaCon. I didn’t think I would get the chance to meet him, but after my Tim Curry photo-op, I was passing by his booth and there was one person ahead of me. Debating whether or not to go, I remembered how much my mom loves him on Scorpion and decided to get an autograph for her.

Even though it wasn’t for me, Elyes was completely cool about the autograph and personalized it for my mom with a special message for her. He even took about 15 – 20 minutes with me talking about a bunch of different things like Scorpion, especially after my dad asked if Walter and Paige were the end game couple. He said he wasn’t sure and then my dad mentioned that Walter was married to Happy and then Elyes Gabel asked us to choose who we would pick. My dad picked Paige and I told him that I would choose Happy. He looked surprised and felt told him that it was because she was super smart and an incredible engineer. He responded with how moody her character was, but I told him that I liked the moody girls which got a genuine laugh from him. We chatted a little more and then he asked how old I was after the Happy debate. I told him that I was going to be 32 and he said that I looked like I was 22. Who knew Eyles Gabel was such a charmer? We spent even more time talking about some various other things and I have to say that Elyes Gabel is an amazing person. After we finished chatting we took a selfie and then I got a hug from him. I apologized that he had to bend down so much because he’s super tall and I’m super short and he laughed it off an and told me he would send me his chiropractor’s bill. It was a really great day to end a very busy Saturday. 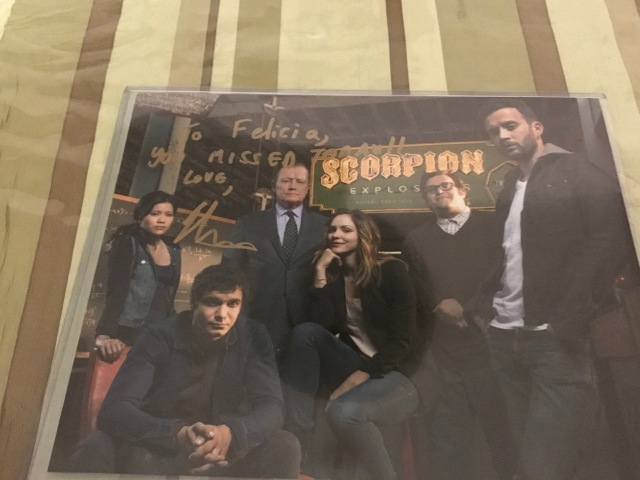