It’s been what feels like forever since the last time I visited my tattoo artist and as I counted down the weeks and then the days I became even more eager as it gave me a chance to continue to work on my sleeve. I have to say thought that I was thinking about abandoning my sleeve to get some work done on my leg when my tattoo artist posted an abandoned tattoo that he had drawn up and said he would give it to the first person that claimed it. Luck wasn’t on my side as he did this when I was at work and I had to sneak off to message him that I wanted it only to find out that I was 30 minutes late and someone else claimed it. Anyway, onto my sleeve.

This month felt like a Claptrap month since I had a space in my already existing Athena tattoo where her shield wasn’t completely filled in and I figured Claptrap’s wheel would fit nicely in that area. Turns out I was right and would. Now onto the debate of which Claptrap to use. There are so many different versions of Claptrap, but we went with a simple one for a few reasons. One was because I didn’t want it to take up too much space. I’m all for huge tattoo’s, I have a bunch of them on my sleeve already, but there are a lot more characters that I want to be able to squeeze in on my Borderlands / Mass Effect themed sleeve. The second was because it was in an area that interfered with another area which my tattoo artist called “prime real-estate.” After a little debate on whether or not we were keeping an arm, my tattoo artist finally got down to work. 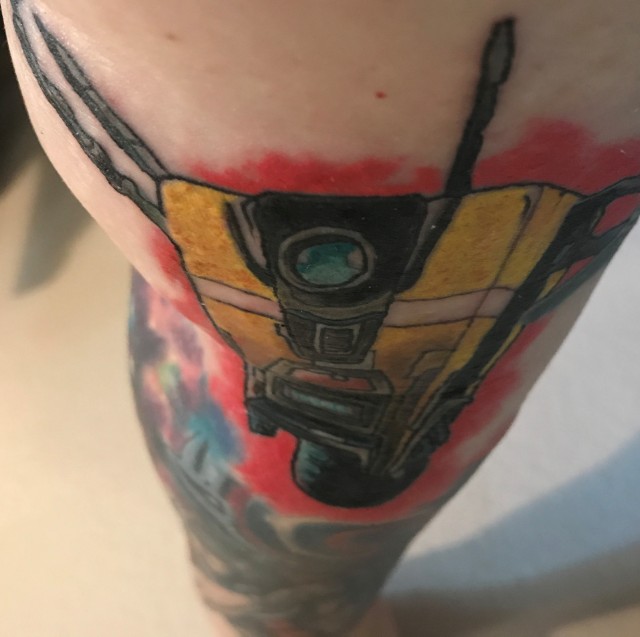 The whole session took about two hours to complete, I’m sure it would have been sooner if we weren’t busy chatting and watching X-Men. I was really happy with the end results and everything about it is kind of perfect. It’s in a good area, it doesn’t take up too much room, and it’s a version of everyone’s favorite annoying little robot. Another awesome tattoo to add to my already existing sleeve of awesomeness.

This is prime season to get some stuff done and my tattoo artist is really hard to schedule, but I was able to make an appointment next month to get some more work done. One more Borderlands tattoo before I move onto another Mass Effect character. So far the Borderlands characters are overtaking the Mass Effect ones and we can’t have that. It’ll be a little difficult next month as we work around my elbow, which will probably hurt like a bitch. Anyway, we’ve already decided to go with a wrap around of my favorite diamond pony, Butt Stallion with a water color rainbow to go on my elbow and under my already existing Liara tattoo. I’ll let you know how everything works out next month.