After playing the first episode of the game, which you can watch in its entirety here, I was pretty eager for the second episode to come out. Since I came to this game a little late, it didn’t take long for this episode to come out and I was able to play it fairly quickly. Going into the episode I was a little weary because of last season. Last season the first episode of Minecraft: Story mode really pulled me in while the second episode was a little lackluster. Hoping that this didn’t happen the second time around I jumped into this episode.

Picking up right where the first episode ended, SPOILERS IF YOU DIDN’T PLAY THE FIRST EPISODE, the Admin is threatening Jessie’s town of Beacontown and the citizens that live there. It’ll be an all out battle as you try to save Beacontown while trying to defeat the Admin. It doesn’t stop there though as this is the Admin and everything he does is basically a trick. It’s time for another adventure to try and put a stop to the Admin once and for all. There will be some more tension between Petra and Jessie in this episode along with your new rival Stella. Where the hell did this chick pop out of? Anyway, Stella thinks that she’s your rival no matter how many times you try to tell her that she isn’t. While it doesn’t seem like a problem at first it kind of becomes one at the end depending on how you play the game.

Unfortunately this episode went the way of the second episode in the first season as it was shorter than the first episode, kind of felt like it should have be included in the first episode and felt a little rushed. Saying that, it was an interesting episode that showed sometimes people aren’t really who they say they are and it kind of breaks one character. I won’t spoil it for you here, but it’ll be interesting to see how this part of the story develops. Moral of the episode is that the Admin is evil and because it’s the Admin, he can do whatever he wants to do. There’s also more tension between Jessie and Petra and according to Telltale my story is constantly changing depending on the options that I choose. While the episode was interesting, the way that this season is going, it makes me think that there will be DLC for this game after the original 5 episodes come out which I’m really hoping is not the case.

The game ran smoothly and loading times were reduced this time around, just like the previous episode which is a pretty big win for Telltale. This doesn’t always happen and they’ve had problems with this in the past. But to stress again, the fighting scenes, which are few and far in between, are really annoying when they aren’t quick time events. This is thanks to the new stamina system that ticks down every time you swing your sword or dodge and roll. Other than that the game was bug and glitch free making the playthrough a smooth one.

Boo Telltale, Boo Apparently when I played the servers weren’t working right and by the end of the episode I wasn’t able to compare my stats with other players. While this isn’t a big deal to a lot of people, it is to me. This is mainly because I like to see how other people have played the game. Did the majority of players make the same decisions that I did or did they choose something else? I always like seeing these stats and I wasn’t even able to see them in the settings menu where you can look at your choices. When I went there immediately after playing the game, nothing came up as if I didn’t even play the second episode to begin with. This is not good.

The graphics are the same for this episode as they were for the first episode. When it comes to these episode based games, I never expect them to change from episode to episode because first of all that would be weird and second of all it would just be inconsistent. Anyway, just as with the first episode the graphics fit and it makes the game just a little bit better.

Finish this episode and you’ll get another 6 trophies to add to the list of 31 trophies for this game. Like the episode before all you have to do is play the game in order to get the trophies. By the end of all 5 episodes you’ll have yourself a new platinum trophy.

Just like the episode before there is no multiplayer, just plain old single player. Once again Telltale is really pushing the Crowd Play feature, which I still haven’t tried. Big surprise there. If you’ve tried this, let me know in the comments section your thoughts about it.

What’s Great:
+ Picks up right where the first episode left off so there’s no wondering what happened because it will actually play out.
+ Another episode that let’s you play around and build some along with more crafting.
+ Short loading times and a bug and glitch free experience.
+ Graphics that are consistent and work for this series.

What’s Not So Great:
– An overall lackluster episode that felt like it was tacked on and should have been included in the first episode.
– A shorter episode that while had a lot of story could have been just a little bit longer.
– No stats were available at the end of my playthrough, even though this might not be a problem for everyone, it is for me as this is one of the biggest draws for me when it comes to these types of games.

If you’ve already started playing this game, you’re going to want to continue with the second episode. The release schedule looks a little more planned out for the Telltale games lately, unlike the release schedules of the past where it took just about a year for each game to come out, yes I’m looking at you Tales from the Borderlands and Game of Thrones. If you haven’t started playing this game yet, but want to, I would say to hold off until the full game comes out and then you can binge play it all at once. Other than that the little preview at the end of the episode has me eager for episode three which hopefully won’t be a total letdown.

Spoilers! Below are the choices that I made for the second episode. 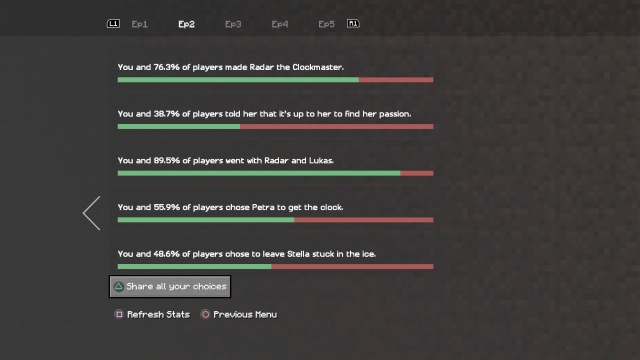