This is one of those franchises that I’ve been playing since I was a teenager. I played this game a few times on the PS2, but mostly did my Tomb Raider playthroughs on PC. I know, huge shock, right? I’ve always loved every single Tomb Raider game, even that really crappy one that was released for the PS2 Angel of Darkness. That’s beside the point though, Lara Croft is an icon and when I heard that Tomb Raider was getting the full reboot on the PS3, I was a little skeptical at first, but then really fell in love with not only the idea but the game. So why the hell is it on this list? Keep reading to find out.

Tomb Raider is about Lara Croft before she was Lara Croft. The new and ambitious archeologist sets out on her first ever adventure and like all Tomb Raider games, something goes horribly wrong. With this game it means that the ship that she’s on, Endurance, gets shipwrecked and Lara and her crew end up getting way more than they bargained for. For a character that is so well known and iconic, this game gives you a new perspective on the character as it’s basically a prequel to all the other Tomb Raider games where Lara is more experienced. As always, Lara will go in looking for one thing and end up finding another in this open world action adventure game.

At first I wasn’t sure what to think about this game. I know it was a new generation of games, but I was still stuck on my first Tomb Raider games and the look and the feel of them. When I finally got around to playing this game though, I fell in love with it because it was new and exciting but it was still the same Tomb Raider game that I was looking for. Yes, some of the mechanics changed and Lara could now use a bow and arrow, totally my favorite part by the way, but it also meant that this was giving her character as well as the franchise a fresh start. I enjoyed this new perspective so much that for a week straight this was all that I played from morning to night. I played a mix of the regular game and the multiplayer which I was pretty good at and actually enjoyed. I was seriously on this loop of waking up each morning and playing this game first thing, breaking along the day for various reasons, and then playing until I was ready to pass out. I even finished this game, but then ended up not getting the platinum trophy? Here’s the thing on why I never finished it though, at first my “friend” was pissed that I bought this game because apparently, I wasn’t allowed to buy games that she had no interest in and no desire to play so she decided not to talk to me for a whole week. This is where the playing day and night came in because I had no distractions and to tell you the truth I was loving it. I happily finished this game and was about to re-start it to go back and get my remaining trophies when my “friend” decided that she was talking to me again and every single time she noticed I was playing this game I would get a phone call, or a PSN message, or a Skype message, or a text and the game became less fun until I just tossed it to the side. This is totally my fault by the way because I’m the one that allowed it, sometimes it just takes a while to see how stupid you once were.

As you can see from the picture above I was able to get 32 out of the 51 trophies for this game, and that was just on my first go around. Can you imagine if I went through with my second playthrough? That platinum trophy would have been mine. Anyway, I’m only missing a few super easy trophies, collectibles and such, and some grindy multiplayer trophies, that I totally could have gotten because I was playing the multiplayer that much at the time. Yes I might be hard to believe, but I tossed Mass Effect 3 MP to the side for this game. It’s not a lot of trophies left and I accomplished a lot because I was able to get 50% of the trophies on the first time around. How many times does that happen?

Probability of this game getting played again…4 out of 5. 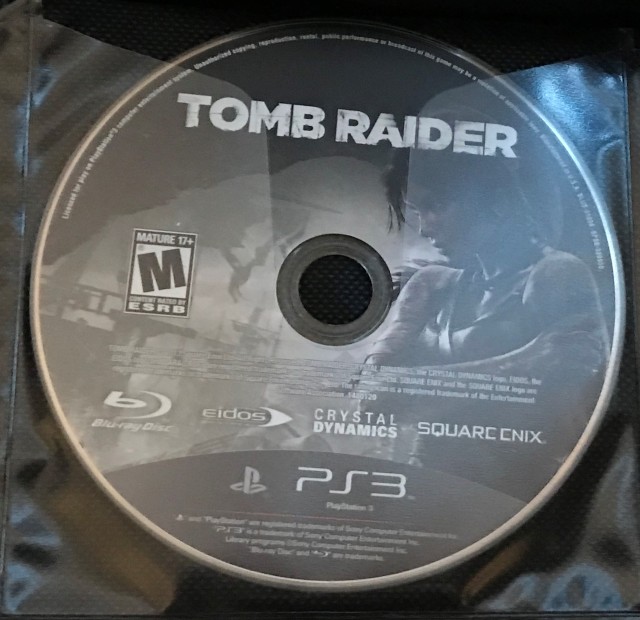 I can’t tell you how many times I’ve thought about getting the remaster for my PS4, but I always stopped because I really want to finish this game first and then I don’t mind playing it again on the PS4. Anyway, I would really love to get back into this game and now that my “friend” is no longer my friend it shouldn’t be that hard to do except I rarely turn on my PS3 these days.

Now it’s your turn. Did you fall in love with the reboot of this icon game and character like I did? Or did you hate it? Are you still not finished with the multiplayer and looking for someone to help you grind your way through the trophies? That would be a good enough excuse for me to turn on my PS3 again. Let me know in the comments section below and for next week another game that I was having a good time playing because I was on someone’s shit list again for purchasing this game, until all was forgiven and I was basically back to square one and all of the enjoyment was gone. By now you probably know why I never finished this game, but I’ll tell you why I never finished God of War: Ascension next week.