As many of you might already know, my Batman knowledge if very slim. I’ve played the Telltale Batman games, the LEGO Batman games, watched a few Batman movies, watch Gotham, but that’s about it. I’m more of a Marvel girl than a DC girl and for some reason Batman never really interested me. Give me a game about Wonder Woman and I’ll be all over it. Anyway, my “friend” said I just had to play this game because it was the best Batman game ever. I said OK because I was tired of arguing and went out and bought the game thinking, “hey this is a single player game and I can have a few days or a week at best of silence if she sees I’m playing it.” Not really a good reason to buy a game, hence why I never finished it.

Batman: Arkham City is about Batman. You get to play as Batman and make your way through the city chasing after Batman’s number one nemesis, The Joker, while doing some other stuff on the side. This is a follow up to the 2009 game, Arkham Asylum, which I never played. Turns out this time around Batman is in this huge super prison within Gotham that has been named Arkham City. Here Batman is going knock out criminals, chase down some common bad guys throughout the history of Batman, and try to find out about “Protocol 10.” While this all sounds like fun if you’re a huge Batman person, if you’re not this game is just a head scratcher.

So I probably should have payed Arkham Asylum first because maybe it would have made more sense. Sometimes jumping into a sequel is not a good idea. For some games you can, others you can’t and I think this is one of them. Anyway, I remember playing this game for about 8 days before finally beating it and saying that I was done. I have to say though I did make sure to get more trophies than my “friend” though because I thought it would piss her off, it totally did. Mission accomplished. Anyway, I really didn’t like the whole story or the actual game play. I thought it was mediocre at best and don’t even get me started with the “gliding.” That was just a pain in the ass and I hated every single part of that. Anyway, there was still a bunch of stuff to do after finishing the main story and because I just wasn’t feeling the game, I put it down and never played again.

I have to say though, I didn’t do bad in the trophy department. Out of the 51 base trophies for this game, I was able to get 30 of them in one shot. Not bad in my opinion. Because of my non interest in this game, I didn’t purchase any of the DLC which added an additional 20 trophies, so I don’t have any of those. Anyway, I’m missing a bunch of random trophies like having a date with Calendar Man, which can easily be hacked, but I don’t do that type of thing, getting a combo score, solving all of the Riddler’s crap, and playing a new game. It’s really a lot that’s left to do and not something I can just jump back into and get the trophies by playing one afternoon.

Probability of this game getting played again…2 out of 5. 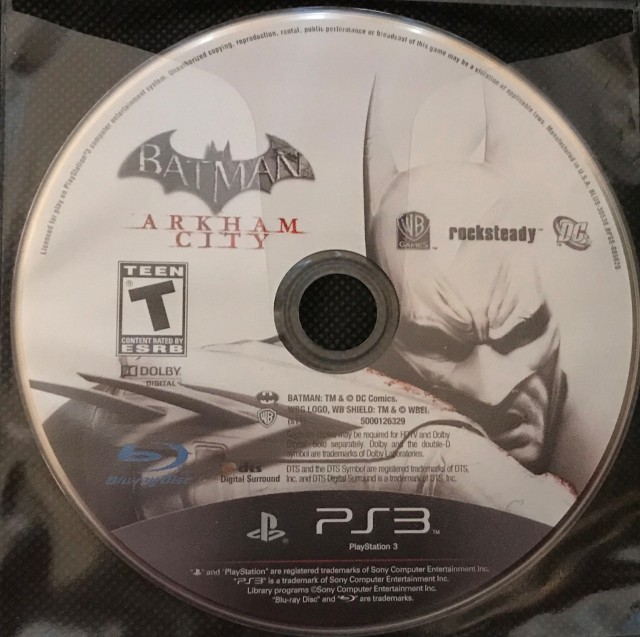 So I still have this game, I have all the games I never finished and only keep a small collection of games that I absolutely love. The rest get sold off for some extra cash to go towards more games…that I’ll probably never finish. Anyway, at the moment I really have no desire to go back and play this game. But you never know, I might look at this game sitting in my folder one day and be like, “hmm…yeah I want to play this.” It can happen. Not right not, but in the future. The far far away future.

Now it’s your turn. Did you love this game because you’re a huge Batman fan? Love this game just because you thought it was great? Hate this game? Actually have the platinum for this game without hacking the Calendar Man trophy? Let me know down in the comments section and for next week a PS Vita game. So I was at this pretty toxic point with my “friend” and really bitched at her because of this game. I needed some time to cool down which is why I turned to my PS Vita and played a free PS+ game. Gotta love that I really haven’t invested all that much money in games for my PS Vita. Anyway, next on my I Never Finished list is Germinator. It looked fun enough, but I only got one trophy. I’ll let you know why next week.