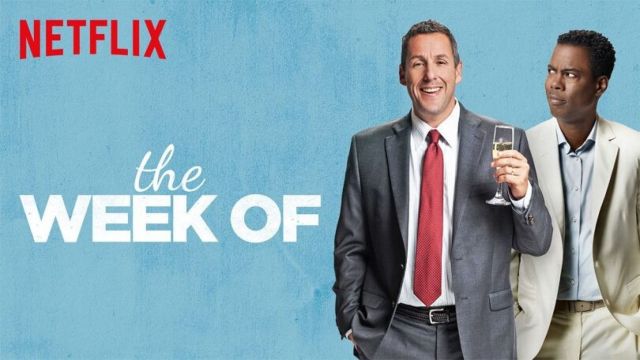 The Week Of is about two families coming together to celebrate the marriage of their children. Kenny, played by Adam Sandler, is the father of the bride and is just a simple man trying to throw his first born daughter Sara, played by Allison Strong, the wedding of her dreams while trying not to break the bank. On the other side of the family you have the very rich and very pompous cardiologist Kirby, played by Chris Rock, who wants to pay for the wedding so that his son Tyler, played by Roland Buck III, can have an even better wedding. Both fathers will basically complete as Kenny insists that this is his duty to pay for the wedding. There will be a bunch of antics and shenanigans that go down before the wedding, but will the wedding actually take place without a hitch and be a success? You’ll find out, but you’ll also find out that this movie isn’t about the wedding and is about something a little more deeper.

This movie was a total snooze fest that I even tried to fall asleep on multiple time without success. I didn’t find anything about this movie funny, or even the reveal of what was pushing Kenny to go to all these lengths to pay for his daughter’s wedding to be remotely interesting. This movie was just completely boring. This movie showed each and every day leading up to the wedding and each and every day became more foolish, not in a funny way, as the movie progressed. I found myself constantly checking the time to see when this movie would end because it was just so unbelievable and not even in a funny way. For a movie that was supposed to be funny, it ended up being not even a little bit funny.

The cast for this movie is just horrible. You would think with Adam Sandler and Chris Rock being the staring men in this film that it would mean something but it doesn’t. It just shows that Adam Sandler’s time as a comedian in movies as well as Chris Rock’s time as a comedian in movies has just passed. Neither of them can make this movie work and it’s just boring and super awkward at times. Adam Sander uses this weird voice throughout the whole movie and it’s not even funny as it brinks on becoming annoying after hearing him talk for the first 30 minutes. Not to mention this serious façade that Chris Rock puts up is totally unbelievable and just makes this movie even worse.

I would strongly recommend that you not watch this two hour snooze fest. The movie isn’t funny and by the time the movie gets to the touching part of why Kenny is going through all this trouble for his daughter’s wedding it’s just not even worth it. This movie made me believe that it’s time for Adam Sandler and Chris Rock to hang up their hats and just call it quits with these movies because they aren’t funny and it just feels like they were forced into this movie and didn’t even enjoy it themselves. I can understand that fans of Adam Sandler and Chris Rock would want to see another movie with both of them in it, I will admit that this was a big draw for me as well, but they are long past their glory days and this movie just shows that. Save yourself some time and don’t lose two hours of your life by watching this movie.