This month just flew right on by and I feel like it seriously got away from me. There were a lot of things going on and I really wish I had more time to game and do all the things that I love, but things like work and other stuff held me back. This is kind of upsetting because for the beginning of the year, I should be excited and at least get some sort of progress going on my goals, but not much was done. Here’s a breakdown of my goals.

Have a total of 125 platinum trophies.

– Starting # of Platinum Trophies: 85
– Ending # of Platinum Trophies: 86
Only one platinum trophy this month and believe me it wasn’t from a lack of trying. It seems like the platinum trophies aren’t coming as quickly as they once were and I’m pretty sure it has something to do with the fact that games are becoming a hell of a lot long, which I’m not complaining about, and I have less time to actually game now a days.

– Starting # of Trophies: 8,074
– Ending # of Trophies: 8,145
I remember those months where I used to be able to get well over 200 trophies. It seems like those times are long gone now as I can barely get 100 trophies a month. This saddens me just a little, but I’m still hoping I can come close to the 10,00 0 trophies that I want to have by the end of the year.

– Starting # of Games 100% Complete: 128
– Ending # of Games 100% Complete: 131
I have to say that I was really surprised that this number went up as much as it did this month. I swear by the end of the month I was rushing to complete a couple of games that I had one to two trophies left to complete on and I was able to do it. Maybe I will actually reach the 175 this year.

Have an overall completion rating of 75%

Play and complete 25 RANDOM games in my backlog

– Starting Number of completed games in my backlog: 0
– Ending Number of completed games in my backlog: 2
I’m counting Life is Strange: Before the Storm in this category because it meets the criteria of starting this game way before the first of the year and having to wait until the episodes were released to finish it meaning that it was in my backlog because I was waiting for the rest of the game to release. Make sense…right? I’m also counting Jeopardy because I bought it during the holiday season and then played this month and finished it.

And that was my month. It was an OK month. Next month might be more of the same as my work schedule is constantly changing these days which means I can’t stick to my normal gaming schedule. While I enjoy working, because it makes me money so that I can buy games, I just wish I had more time to actually be able to game. Anyway, I’ll let you know how things end up next month. 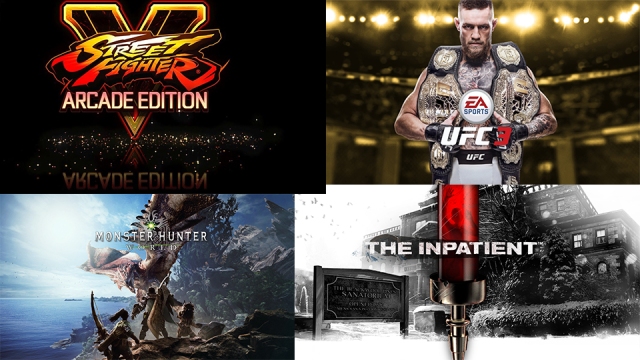 It’s hard to believe another gaming year has come to an end and now we can look forward to all of the new games that are coming out next year. There are a lot of good games coming out on the horizon and next year seems like it’s going to be a really good year for gamers. Let’s see if there’s any of those games coming out in January.

*Just as a side note, my list of January releases is not perfect. There might be some missing, or some dates may change. If you have anything you want to add feel free to let me know in the comments and I’ll include it in the list.*

And that’s everything for the month of January. Not really a lot of games coming out, but it’s still the first month of the year so I’m not worried. I’m sure by the end of the year I will have at least added another 20-30 games into my backlog of games.

I would be interested in The Inpatient, if it wasn’t only for the PS VR. Although I didn’t give Until Dawn the best of reviews, you can read my review of the game here, I’m interested to see what else they’re able to do and this game looked pretty damn good when I had first seen it presented at E3 this past year. The only problem is that it’s only available for PS VR. I won’t give in and buy this headset that is one day going to sit around like my Guitar Hero / Rock Band Equipment. I don’t feel like the VR stuff is perfected yet and I’m not sure that it ever will be. Moving on though, if it wasn’t for the whole thing being VR then I would definitely pre-order it.

Now it’s your turn. Anything on this list something you’ll be getting day one for the first month of the year. Have one game that you’ve been waiting for and will finally get to play it come Jauary? Let me know down in the comments section as I’ll be sticking to my huge backlog of games for the month.