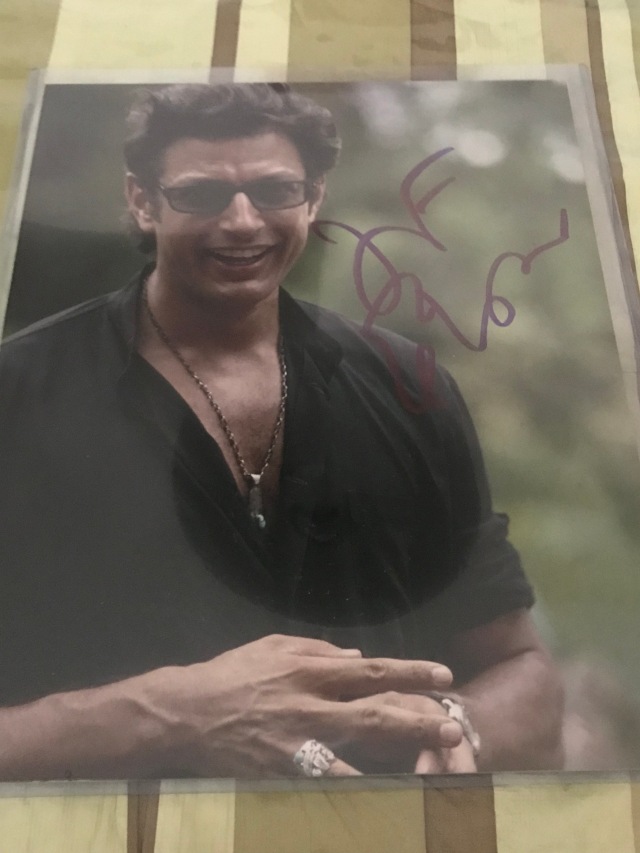 If there’s one thing I always anticipate about Saturday and Sunday at MegaCon, it’s that it’s going to be super busy and people are going to be running around trying to get the big “celebrity” autographs from the people that are only showing up on Saturday and Sunday. For me this means running back and forth between the photo-op section and the VIP autograph line and a lot of waiting because you never know when the celebrities are going to come out.

When first arriving on Saturday, I was told that if I wanted a Jeff Goldblum autograph that I would have to line up immediately, pre-pay and then wait for him to come out. I couldn’t jump from line to line depending on who was out and who wasn’t. This was fine because it’s Jeff Goldblum. He’s a Hollywood icon and I can still remember seeing him for the first time in The Fly at my grandmothers house.

Anyway, the most interesting part of waiting in line is meeting other Jeff Goldblum fans. The most interesting person that I met was the Pez collector who was getting a dinosaur pez dispenser signed. According to her, she has over 3,000 pez dispensers and a lot of them signed. All of this conversation came to an end when we were instructed to cheer because Jeff was on his way out. We were then told to cheer louder if we really wanted him to come out. I understand all the hype, but I’m not really the scream for me as I come out behind the curtain hype.

When Jeff finally came out, the autographs went quick as there was no personalization. This is kind of a downer because everyone wants something with their name on it and an autograph. Anyway, this wasn’t the first time so it was fine. When I was rushed up to his line with my dad we both said hello as Jeff stared down at his picture and signed. He finally looked up to push the autograph my way. I thanked him and told him how much I loved him in The Fly and got a thumbs up from him and when my dad mentioned that he was great in 9 months all we got was an open-mouth oh with another thumbs up. No sound or thank you from Mr. Goldblum making the experience pretty forgettable and not at all that fun for the money spent on an autograph.