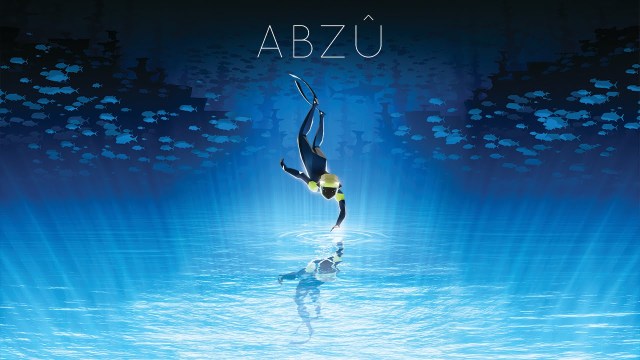 I knew that I wanted this game the moment that it came out. Mostly because it had the same Journey feel to it. This was probably because it was directed and composed by the same people who created Journey. I could never really justify the price tag that came with it though for some reason, but I did finally pick this game up when it was free thanks to PS+. Keep reading to see if it was all it was hyped up to be.

Abzu puts you in the role of a faceless diver. It’ll be your job to restore the ocean to it’s normal state as you freely move around and interact with the different species that the ocean has to offer. Throughout this journey, no pun indented, you’ll basically be drawn deeper into the ocean because of a great white shark. This shark has something to show you and you’ll discover an ancient technology within the ruins of the ocean. Will this be the divers downfall or just the beginning?

Even though this is truly the underwater Journey because it deals with life and death and then rebirth, it was still an amazing game and just an amazing experience. I will say that the game is a little slow at times, but when it picks up, it really picks up and just grips you so that you want to finish. Like Journey, this game is short, but it’s all about how you play it. If you just wanted to play the story you could probably do so in about 90 minutes, but if you actually want to explore and see everything the ocean has to offer along with the different species of ocean life you can end up spending hours in this underwater playground.

While the game and the story of the game is just beautiful, the playability of this game is it’s downfall. The controls are just frustrating as you try to move around the ocean to the point where you want to toss your controller out the window. You constantly have to hold down the R2 button in order to stay underwater and keep on a path while pressing X to swim faster and then using the right stick to direct where you are going. Sometimes you’ll have to adjust your view using the left stick and this can cause you to move up instead of down. Even after I finished the game and went back to get the collectibles, I still couldn’t get a hang of the controls and this had me extremely frustrated. Other than that the game was glitch free and ran beautifully.

The graphics for this game were just beautiful as you explored this underwater area. The ocean wildlife was a little more cartoonish than real looking, but that didn’t matter. Each creature was still beautifully crafted and it showed that a lot of time and effort went into this game to make sure that it looked beautiful.

Finish this game and do everything it has to offer to get yourself a total of 12 extremely easy trophies. You’ll have to play this game about twice, even though you could just use a walkthrough for the collectibles on the first go around, but that way kind of sucks. You want to experience this game first. Get as many collectibles as you can and then go back using the chapter select to clean up what you missed. If you use a walkthrough from the start, you end up missing the game and all it has to offer.

Surprisingly there was no multiplayer for this game and I have to say that I kind of missed it. I liked how Journey made you meet up with random people who you didn’t know until the end of the game and I felt like this game was missing this aspect since it was strictly a single player experience. I guess the single player experience made sense for the overall story line, but I thought it would have been nice to have a random person around every now and again to experience the game.

What’s Great:
+ It’s underwater Journey which means you’ll deal with themes like life, death, and then rebirth.
+ The graphics are beautiful and game was just beautifully crafted.
+ This game is bug and glitch free so you can sit back and enjoy the experience.

What’s Not So Great:
– The controls are horrible and will make you want to throw your controller out the window.
– This game is seriously lacking the multiplayer aspect (never thought I would say that) that Journey had and this game would have stood out a little more if it had that.

This game is seriously one of the most beautiful games that I’ve played since Journey, but on that note it had a problem with controller issues and it was lacking the multiplayer aspect of Journey. I loved the underwater feel and loved the interaction with the ocean wildlife, but the controls made me want to give up on this game a lot. They were fickle at times and just plain frustrating. If you didn’t get this game free via PS+, I would say that the $19.99 price tag for this game is way too much for a game that you can complete in less than a day. Once you finish this game and get all the trophies, there really is no replay value. I know a lot of time and effort went into this game but that price tag is a huge one. If you didn’t get it for free, then I would say to at least wait for a sale because unlike Journey, this is one of those games that are beautiful, but also missable if you don’t have the funds.